This tutorial shows the step I followed the first time I deployed a web app into Google Cloud Platform (GCP), using Google Compute Engine (GCE), in 2019.

After having worked in IT for many years, I am not proud the way I got it working, since I had to connect to instance with Google Cloud Shell, and create the Docker image from there. I am sure that any more expert developer, with more experience with Google Cloud Platform, would blame me for that, since there must be at least 10 ways of doing that into an automated and pragmatic way for a proof of concept, with zero cost.

Once you are logged in, create a free account into Google Cloud Platform and enable it, you may get some free credits to spend.

Once the service is added, you can access to Google Cloud Console. Note that a default project will have been created, but you may create a new one.

If you just created the account, a default project will have been created. Go to the top bar, and click on the name of the project. A new pop up will be displayed. showing the Project Id. Please, take note of Project Id of the project you want to use. You will need it later. You can find it

Even if you use free initial credits, you will need to enable billing on Billing section and provide card details.

Bonus point: if you do care a lot about your credits, go to Billing section, Budgets and Alerts page and setup some alerts. You will receive emails on completing defined percentages of your budget.

Install Docker. You will need it for building your Docker Image and testing it locally.

Configure Docker to use gcloud to as credential helper. This will allow Docker to push the image to your private Google Cloud Container Registry.

Build your Docker Image, in case you didn’t do it before. The tag format is very important, as it tells Docker where to store the image into private Google Cloud Registry.

Launch Google Cloud Console, and, in Compute Engine section, access to VM instances page. From there, click on Create instance button on top.

A new page is displayed. Before seeing the picture below, note the following points: 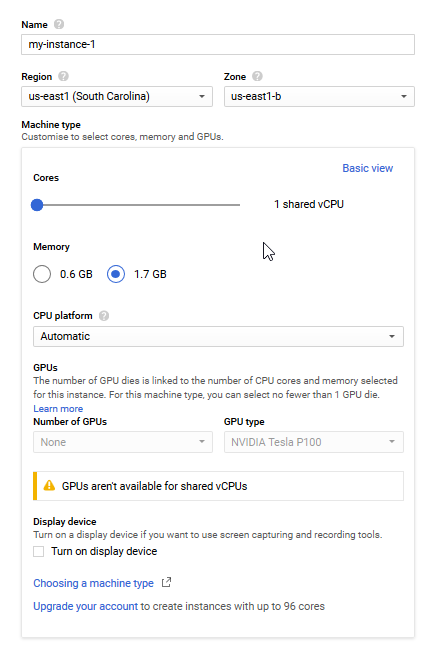 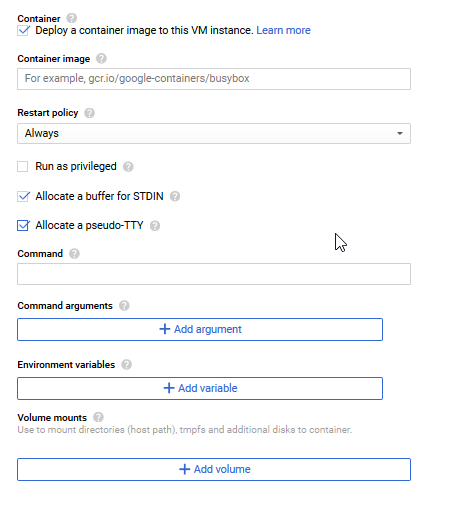 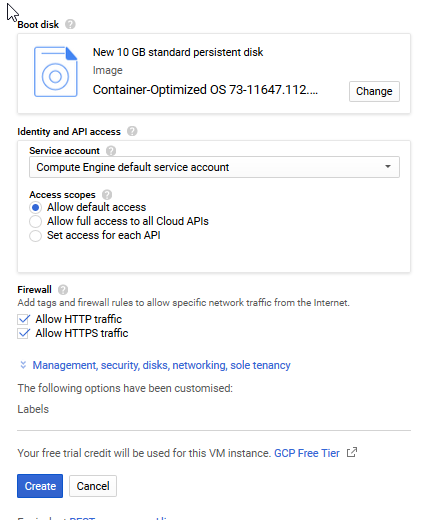 6. Deploy your web app or service to your VM instance

Note that this step is not needed if you had push your Docker image to either a Docker Registry or Google Cloud Registry and specified the Docker Image path on creating the VM instance in previous step.

In Google Cloud Console, in Compute Engine section, access to VM instances page. From there, click on SSH button on the row regarding the created instance. A new SSH terminal will open and you will be able to change your instance.

I am not proud of this step, 🙁 . From there, I just cloned with git my project, built the Docker Image again (in the same way I did in previous step), and just run the image:

App is up and running, but is not accessible yet from outside, in Google Cloud Console, in VPC Network section, access to Firewall Rules page and add a rule for incoming request to <EXTERNAL_PORT> exposed by Docker in previous step. You can specify IP ranges or just 0.0.0.0/0, if you don’t really need them.